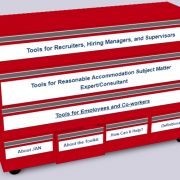 Managing disability accommodations can be a real challenge for both employer and employee. Of course, we want to do it gracefully, comply with the law and make sure the result is a productive employee.

The Toolkit provides guidance for the different areas of the employment process and a resource for recruiters, hiring managers, supervisors, human resource professionals, accommodation consultants and allies of employees with disabilities.

Here’s an example of a resource page.

You can access the Workplace Accommodation Tool Kit https://AskJAN.org/toolkit

Life would be so easy if there weren’t other people …right? And, so boring too. One of the challenges we face is getting out of our heads when facing a “problem.” Here’s how to take a more conscious approach and eliminate the drama in the process.

I can guarantee you that any approach other than the above will result in no good to you, your company, your loved ones, or anyone else. I say this without reservation and with good intention.

I just read an interesting 9th Circuit opinion https://lnkd.in/gacp9Zg . I can see the lawyers telling us there is now a no hugging rule in the workplace. According to the court “hugging can create a hostile or abusive workplace when it is unwelcome and pervasive”.

Apparently the boss in this case did way too much hugging for way too many years. Apparently the plaintiff couldn’t take it anymore. She felt the hugging had sexual overtones. And maybe it did.

There is a sliding scale of creepiness when it comes to hugging. And there is a personal space scale too. Most people are OK with a good natured hug. However, “chest to breast” hugging can be creepy and unwelcome. Some people don’t like being touched at all, maybe for some very personal reasons.

I like hugging people. Mostly friends and family. But there have been occasions where someone I had just met needed a hug and I gave it to them.

What I won’t do is be creepy about it.

PS it’s probably too creepy to pull a sandwich hug at work.